When you are missing teeth, it can be difficult to know which replacement option is the best.  Most people prefer the option of something that is not removable.  We don’t like things we have to take out at night or for cleaning.  Basically, we want something that feels as much like natural teeth as possible. 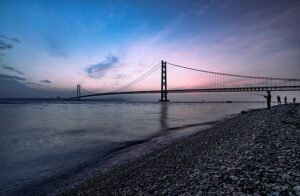 In the case of bridges, this term generally refers to a dental prosthetic (with replacement teeth) that the dentist permanently cements into the mouth.  Just like a real bridge connects the land on either side of a body of water, a dental bridge connects the teeth on either side of the missing tooth space.  The purpose of any type of bridge is to replace the missing tooth or teeth and restore normal chewing function in that area.

Officially called fixed partial dentures, a traditional bridge replaces one or more missing teeth and connects the replacement(s) to the teeth in front of and behind the missing ones.  The teeth on each end of the space must be fully covered by crowns in order to support the replacements in between them.  So a bridge looks like a row of multiple teeth all connected together, with crowns on each end. 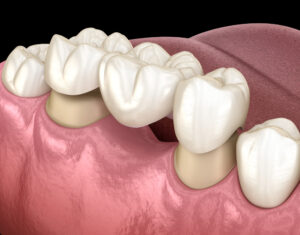 The fact that the supporting teeth on each end of a bridge require full coverage with a crown can be good or bad.  For example, if the tooth adjacent to a missing tooth space is perfectly intact, with no history of cavities or cracks and no dental work at all, preparing this tooth for a crown would be a bad thing.  Preparing a tooth for a crown requires the removal of all of the enamel on the tooth to make room for the material of the crown.  We never want to do that to a perfectly healthy “virgin” tooth.

However, if you have a tooth with a large cavity or crack that would need a crown anyway, using it to hold a bridge could be a good thing, killing two birds with one stone.  This is also the case for a tooth that already has a crown covering it.  Adding a bridge would not cause any additional harm to the tooth.

So for traditional bridges, we carefully assess the state of the teeth that would bear the burden of supporting the replacement teeth.  Teeth planned for supporting a bridge must have healthy gum and bone tissues around them since a bridge will require them to bear heavier chewing forces.

Ideally, a traditional bridge will replace just one or two missing teeth, and the supporting teeth on each end will be larger than the fake teeth they will support.  A traditional bridge exists outside of the jawbone and gums, resting on teeth only.

One of the most important disadvantages of a traditional bridge is the fact that if just one of the supporting teeth has a problem (like a new cavity), we must replace the entire bridge. 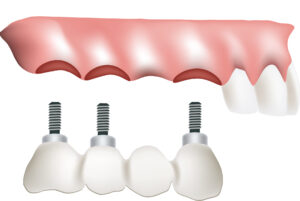 Like traditional bridges, implant-supported bridges connect multiple “teeth” in a row, requiring different techniques and/or accessories to clean these areas.  They both have the replacement teeth resting outside of the gum tissues, without the ability to floss between the teeth.

Comparison of Traditional and Implant-Supported Bridges

There are some really important advantages of each bridge option, and in many cases, the choice is quite simple.  Dr. Ann will guide you through the decision process for your unique situation.  In general, here are some important things to know for comparison.

Which bridge is more expensive?  Implant-supported bridge costs more because it requires the surgical placement of the dental implants in addition to the bridge itself.

Which bridge is better when you have to replace three or more teeth?  An implant-supported bridge is stronger for what we call “long spans”.

Which bridge is better when someone is missing all of the back teeth?  An implant-supported bridge is the only option in this case.  Traditional bridges require a tooth on both ends of the missing space, so if there is not a tooth in the back, you cannot have a traditional bridge.

Which bridge is faster, from start to finish?  A traditional bridge is much faster.  An implant-supported bridge requires the additional step of the implant surgery and its subsequent healing phase before any prosthetic teeth are in place.

Which bridge is least invasive?  A traditional bridge is less invasive in that there is no surgery into the gums or jawbone.  You could make the argument, though, that because it requires the removal of tooth structure on the supporting teeth, it also is relatively invasive.  It just does not require any surgery.

Call Designer Smiles today to schedule a consultation with Dr. Ann.  She is an expert in both types of bridges and can help you decide which option will best meet your specific needs.